“If everyone could “pay it forward” at least once, it would help unite & strengthen our community.” – Ken Cota

We traditionally take part in several gifts of warmth during the cold winter season. This year we started with a mixer at our new Manchester office in partnership with the Manchester Rotary Club.

We enjoyed meeting so many positive people focused on building and supporting their communities! (Rotarian member, Paul, looks forward to gifting heating fuel to someone in his community. A group of Rotarians and local high school teachers take a photo with an exchange student. Casey Cota shares the origins of the Ken Cota Gift of Warmth tradition.)

Home Sweet Home is 2332 Depot Street, Manchester Vermont! That’s where you can find us now for all your heating, cooling, or plumbing needs. No worries we’ve only moved across town with a little more room to grow. Maybe you’re familiar with our wonderful neighbors, the Eagles Club & Bob’s Diner.

A great addition to your home if you’ll be away visiting family or on the slopes for an extended period of time is the 24/7 low temperature smart alarm system. Give us a call and ask about the Guardian system – 802-362-1941. While you’re away we can help keep your home safe and warm!

As New Hampshire residents start turning on the heat to combat colder daytime and evening temperatures, fire departments and emergency responders expect an uptick in calls for help related to carbon monoxide exposure. To educate citizens about the elevated risks associated with carbon monoxide in colder weather, State Fire Marshal Paul J. Parisi and The New Hampshire/Vermont CO Alliance are committed to putting this issue at the forefront throughout November, which has been recognized as Carbon Monoxide Awareness month in our state since 2010.

Marshal Parisi wants to remind residents that, as people spend more time indoors and the heating season begins, it is important to realize carbon monoxide poisoning is a deadly threat within your home and is particularly dangerous because we cannot see, smell or taste it.

“Carbon monoxide (CO) gas is created whenever a fossil fuel such as oil, wood, gas, charcoal or kerosene is burned. These are all commonly used within heating systems in our region and as winter approaches, our use of them increases. These factors raise potential for dangerous levels of carbon monoxide to build up in our homes. Basically, when people breathe in the carbon monoxide gas it replaces oxygen in the body and can suffocate you before you realize what is happening,” says Marshal Parisi.

TO COMBAT THIS RISK, HERE ARE SOME TIPS:

Nationwide, hundreds of people die accidentally every year from CO poisoning, often caused by malfunctioning or improperly used fuel-burning furnaces or appliances. Marshal Parisi advises, “Install a battery-operated or battery-backup carbon monoxide detector (CMD) in your home, whether you live in a single-family home, multi-unit dwelling, or a rental unit. You want to make sure they are installed outside each bedroom, and on each floor including the basement because over a third of CO-related fatalities happen when victims are asleep.” 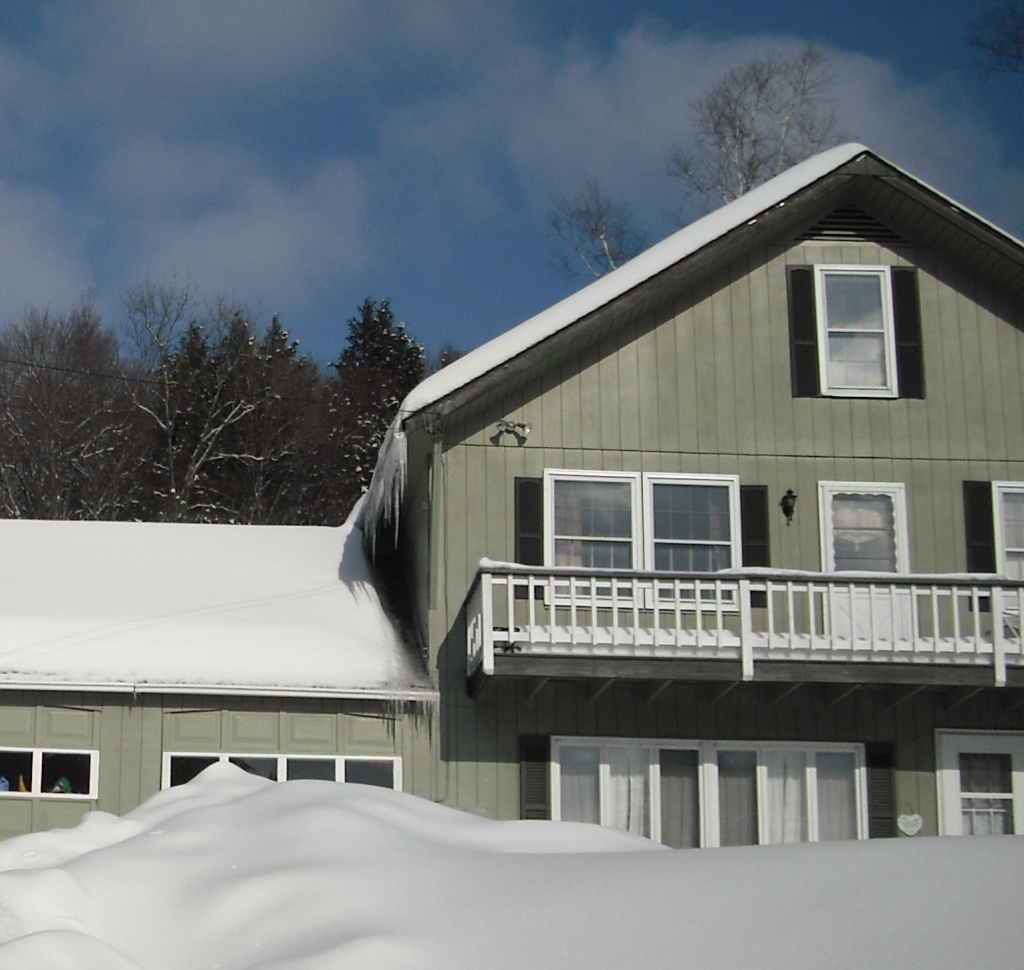 Last year, emergency services personnel responded to 1,100 incidents in New Hampshire where carbon monoxide was a threat.  With temperatures falling around the state, earlier this week at least two fire departments were called to properties due to carbon monoxide, including Keene and Rindge. In neighboring Massachusetts, there was a carbon monoxide fatality less than two weeks ago (Oct. 18, 2018), which may be related to a home heating system.

These incidents underscore the importance of CO alarms. Symptoms of CO poisoning can mimic viruses such as cold or flu and may include headache, dizziness, weakness, nausea, vomiting, sleepiness, and confusion.

“Do not ignore symptoms, particularly if more than one person is feeling them.  Marshal Parisi warns, “If you suspect CO poisoning, get outside to fresh air immediately, and then call 9-1-1.”

It is hard to think about heating fuel on one of the hottest days of the year, but this Sunday marked an important milestone. 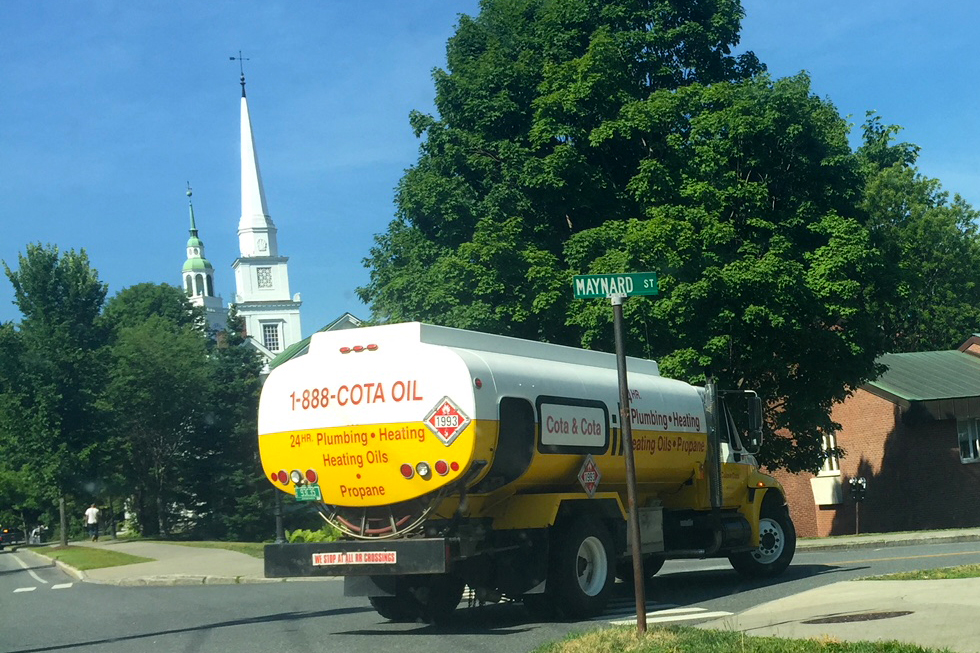 On July 1, Vermont and the rest of the Northeast switched to ultra-low sulfur heating oil.

As part of the 2011 Energy Act signed into law by then Governor Shumlin, the “Clean and Green Oilheat Initiative” mandated Ultra-Low Sulfur Heating Oil with an implementation date of July 1, 2018. The rest of New England, New York and New Jersey also adopted the same 15 parts-per-million (ppm) standard.

Heating clean also save money.  Boilers and furnaces operate more efficiently when running ULSHO, because the fuel produces 90 percent less ash and 40 times less soot than regular heating oil. This means more heat stays in your house and less goes up your chimney. Cleaner fuel also result in fewer deposits on the heat exchanger, which prolongs the life of oilheat equipment with fewer costly repairs. This clean fuel can also be blended with renewable biodiesel and used with existing equipment and fuel storage tanks. And when blended with renewable biodiesel, ULSHO has fewer greenhouse gas emissions than most other heating fuels, including natural gas.

More than half of Vermont homes and businesses choose oilheat to keep them safe and warm. Vermont’s new clean fuel standards will help save money and protect the environment.

IT’S THE KEN COTA GIFT OF WARMTH, HELP CREATE SOME GOOD IN THE HOOD!

96.7 TSA FM and Cota Oil NEED YOUR HELP TO PAY IT FORWARD!

IT’S THE KEN COTA GIFT OF WARMTH, HELP CREATE SOME GOOD IN THE HOOD!

WTSA and Cota and Cota are once again giving away 100 Gallons of Fuel Oil or Propane Gas to someone in our community. We are looking for your help to pay this forward. Tell us about someone you know, a friend, a neighbor, a coworker,a family member or someone in your community that you know needs some help.

Submit the person you think could use a little help this winter season and why to us before noon on Tuesday 12/22.
Send to: psa@wtsa.net or Send us a private message on facebook at 96.7 wtsa fm.Mail us at WTSA, P.O.Box 819, Putney road Brattleboro VT

Or stop by and give us your message. All submissions will be strictly confidential. On Friday, December 22nd at 8:15am, Casey Cota from Cota and Cota will stop by the studio and help announce who will receive this generous gift.

All the details online at wtsa.net. In the spirit of giving back to our community please help us to pay it forward and create some “Good in the ‘Hood” with The Ken Cota Gift of Warmth from Cota & Cota and 96.7 TSA-FM!

Familiar Chill in the Air 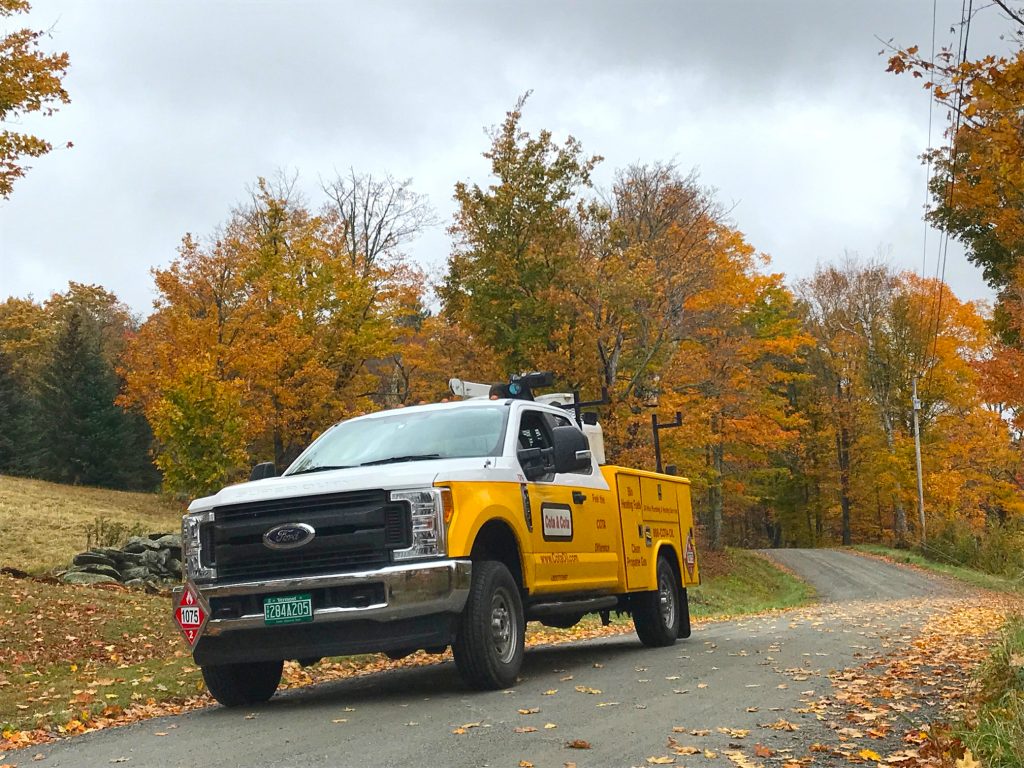 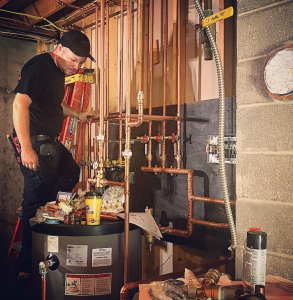 Let us take the worry out of heating your home this winter!

This includes your thermostats, smoke & carbon monoxide detectors. These should all be changed annually.

Check that your radiators are open, not blocked by furniture, and not filled with dust or pet hair.

Seal drafts around windows and doors. Your chimney can also be a source of heat loss. Make it a habit to shut the flue after the fireplace has cooled.

Large amounts of snow and ice can block our ability to deliver as well as create a danger for your health. Consider snow-blowing a path to your fill pipe and check that outside vents are clear of snow after storms.

Clean up the space near your heating system, make sure it hasn’t become crowded over the summer months.

We’re available 24/7 for all your heating needs – stay safe & warm this winter. Quality service you can depend on in every season. (888) COTA-OIL 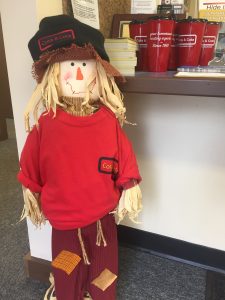 This is a special occasion for Cota & Cota to celebrate 30 years of service for two amazing employees this fall.  Our profound thanks and congratulations go out to Chip Hewitt and Wayne Palmer! 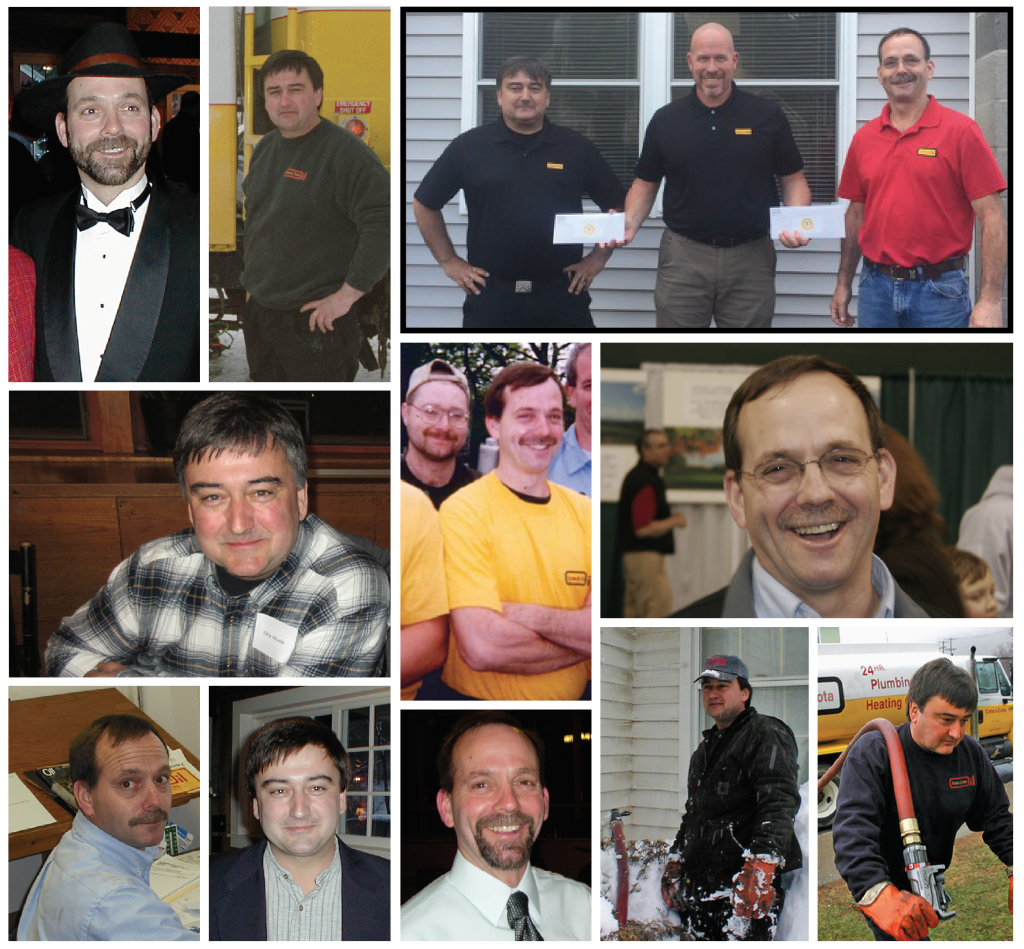 Celebrating 30 years in the Cota & Cota family with Chip & Wayne.

Chip started as a plumber’s apprentice and a delivery driver in the winter.   Chip’s can-do attitude always makes the workday enjoyable.  His versatility quickly made him an asset to many different departments.  Chip’s ability to complete anything from plumbing projects to heating installation projects to deliveries to construction projects allowed the company to grow.  Now doing heating estimates, Chip has added great knowledge and commitment to this department.

With Chip’s timely dry humor he keeps his coworkers on their toes.  And his good-hearted nature helps make the work place an enjoyable place to be.

Wayne Palmer came onboard in August in 1987 from Gay’s Fuel Service.

From the early days of meeting Wayne, I knew he was about making quality his top priority.  He is always great at teaching people new skills and helping others problem solve.  Wayne’s knowledge in both oil and propane service has helped to make Cota & Cota the company that it is today by setting the standard for quality.  Wayne’s ability to help with a problem day or night shows not only his commitment to his fellow employees but also to his craft.

Over time, Wayne has evolved just like Chip by moving from service tech to field supervisor to estimator to his current position of service dispatch and scheduling at the Creamery, where he took over for Lou Tomberg. Wayne has taken on every new task with wanting to be the best he can be at it and for that we thank him.

Chip and Wayne, thank you for all you have done and will continue to do, to make Cota & Cota the leader in the heating industry, but more importantly, making others around you better. 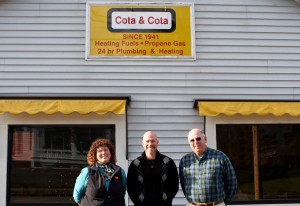 MAXIMIZE YOUR HOME COMFORT WITH PEACE OF MIND – We can help!

Don’t let the warm weather fool you – Fall is on it’s way!

Since 1941 we’ve provided quality heating fuels & service for families and their homes. Take a look at the Farmer’s Almanac 2018 Outlook below and decide for yourself what may be in store for us this Fall & Winter! 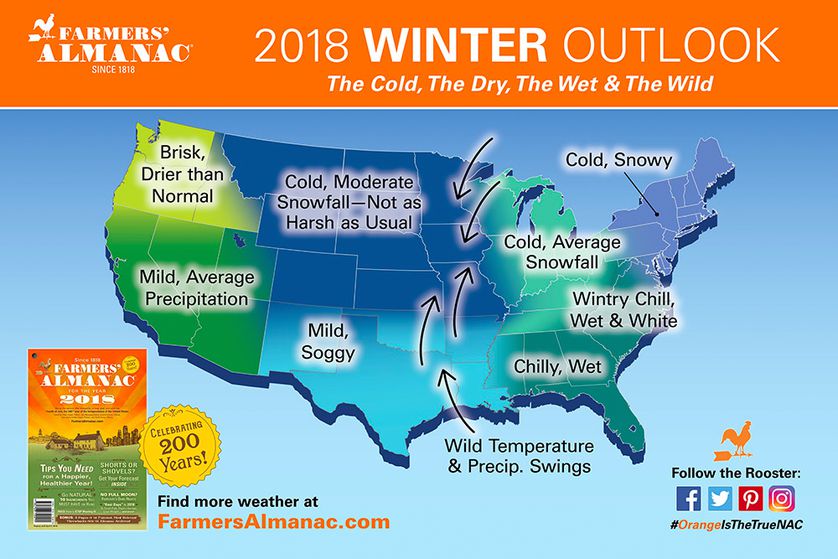 When temperatures start to drop, give us a call at (888) COTA -OIL  for all your home heating needs.

• Generators – winter weather is unpredictable. Starts & restores power in seconds, whether you’re home or away.

• Home Winterization – master plumbers can prepare your home for the winter & avoid freeze-ups while you’re away.

• Gift of Warmth – help your neighbor or family member in need, we provide gift certificates for home heating fuel. 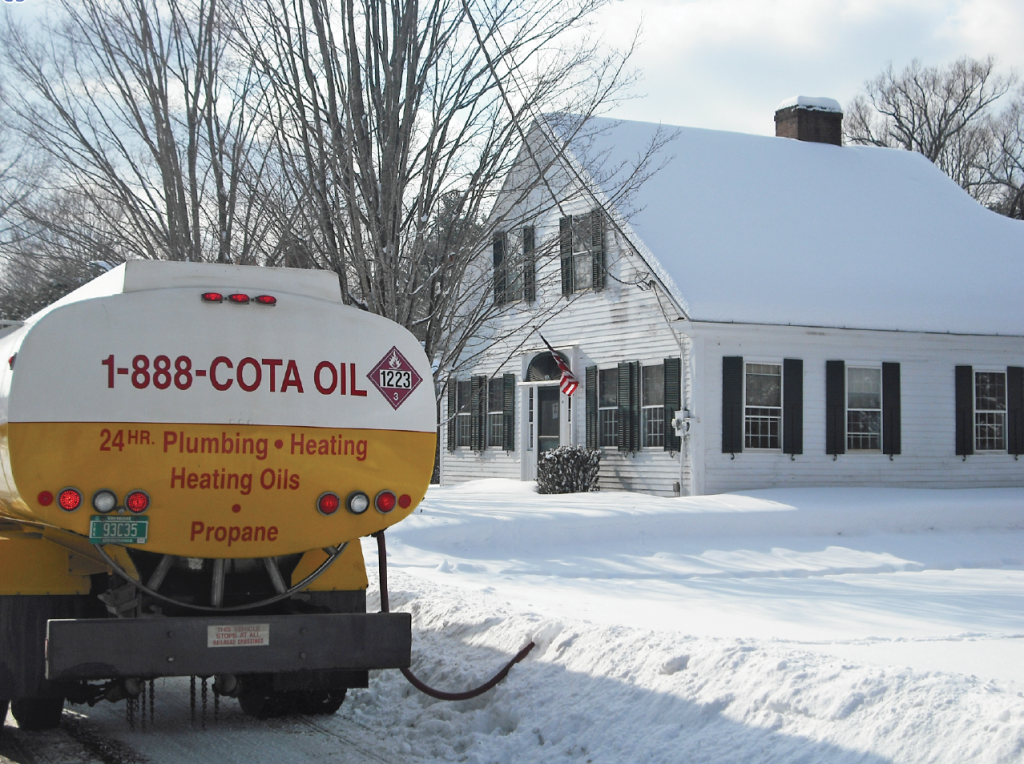 We’re thrilled to have been a part of these pop-up galleries with other organizations & businesses focused on strengthening the Manchester community! 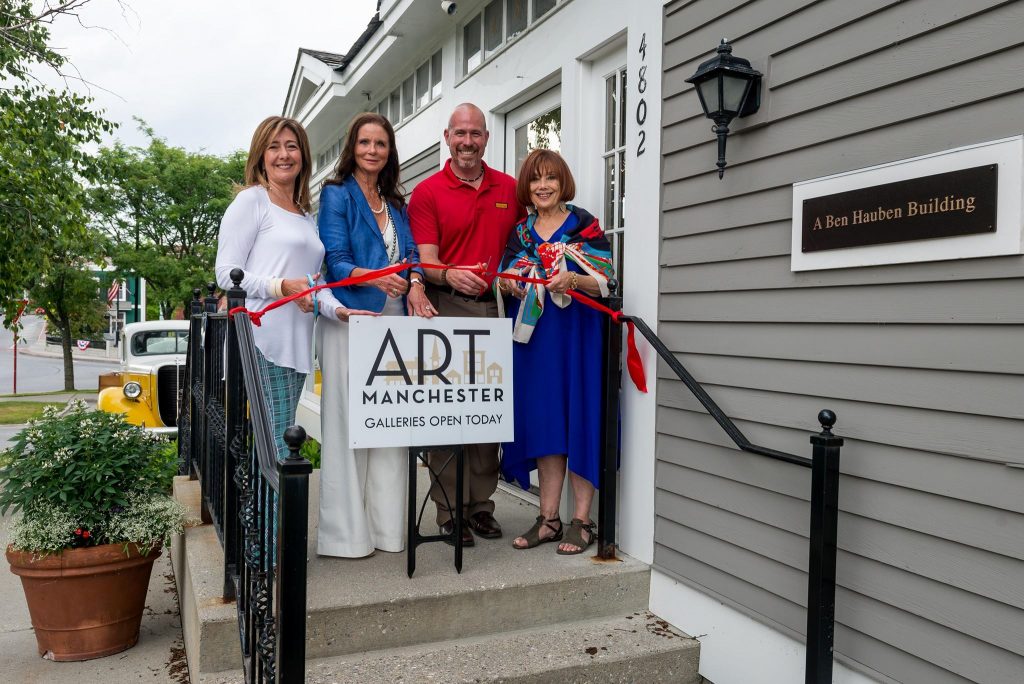 They opened in July, 2017 at several locations in Manchester, VT. Click here for the locations. 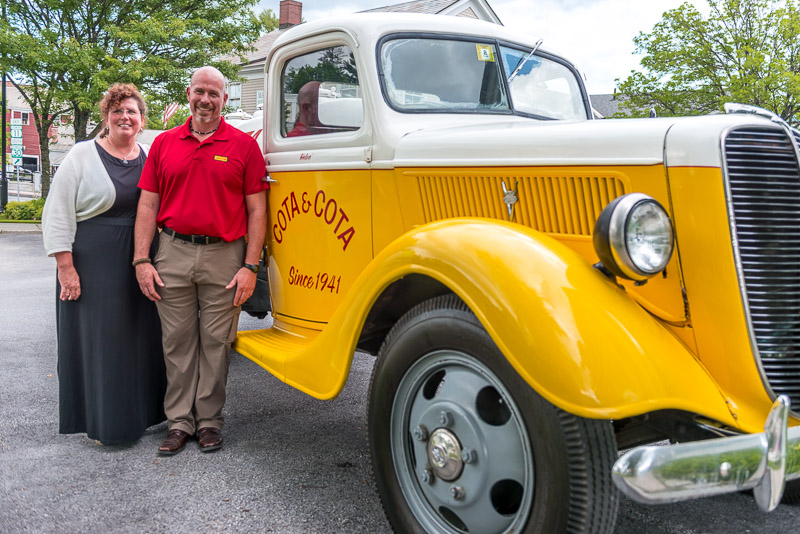 Just recently they’ve decided to extend ART Manchester until October 15! You can read about it here. 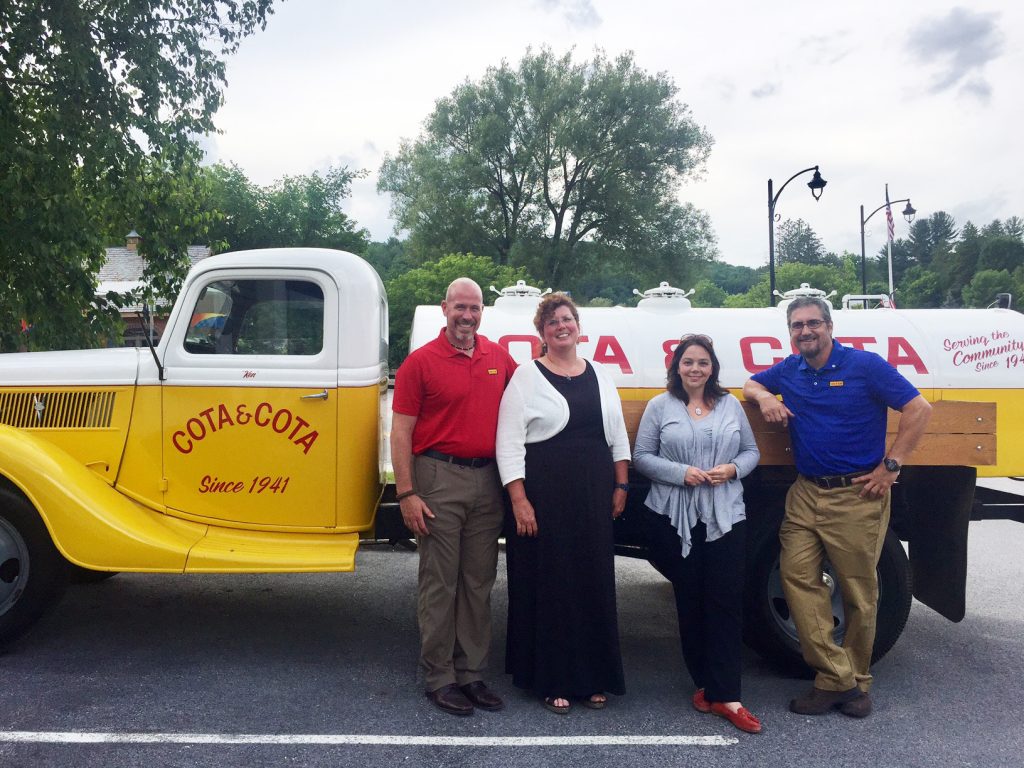 You may know us as Cota & Cota Oil but we also have all your PROPANE needs covered in every season, including grilling season!

Bring your 20 lb. gas grill tank in to any Cota & Cota office to exchange it for a full tank. Please allow 24 hours to refill your own tank. **Call your local office for pricing.

In the spirit of SUMMER FUN & GRILLING we decided to share our top 3 favorite BLUE videos.