Melissa Smith (Brattleboro Office) ~ “I participated in the Relay for Life of Windham County held at the Brattleboro Union High School track field on June 27 and 28, walking for Team UNFIed for a Cure. We had a team of 15 members (adults and children). The theme for the 12 hour event was “Mardi Gras”.
It was very sobering to hear all of the opening words, and to stand next to one of the other participating teams silently sobbing as they spoke to open the event.  We started walking on the 3rd lap, as the first 2 were for open only for survivors and their caregivers-it made you see how directly impacted many people are by this disease.  There was one group next to us with an newly made sign, one person they were walking for unfortunately lost their life to this battle just 2 days before the event. To see all of the signs with pictures honoring lost loved ones and reading the many luminarys that lined the entire track (all being lit as the sun went down) was very moving.  I’m proud to report that our team raised over $3500.

Although I had made donations in the past, this was my first year walking. It is something that i believe everyone should experience at least once in their life.  So many people are affected by this and so many struggle every day.” 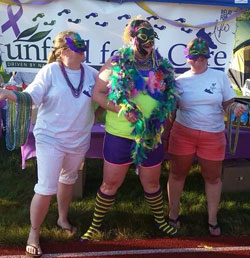 Jaimi Russell (Bellows Falls Office) ~ “On Saturday June 28 and Sunday June 29, I relayed for my aunt at Riverside Middle School in Springfield, VT.
Before last year, I had only heard of Relay for Life. When my dad and several friends participated in the event last year, I was able to come face to face with what it was about during the Opening Ceremony. I listened as the chairperson gave her speech.  It was emotional, beautiful and moving all at the same time.  I stood there as I remembered my aunt (who my family had lost to brain and lung cancer), and her infectious smile and her giving heart.  As I stood there thinking about her and the tough battle she fought, I knew Relay for Life was an event I wanted to be a part of.  Shortly after, I formed a team, started recruiting team members and donations, and on Saturday the 28th, I found myself setting up our site at RMS with the rest of my awesome team members (including co-worker Harold Elliott), surrounded by 250+ more people who were all there to relay big!
By 5:30am on Sunday, our bodies were exhausted from being up for 24 hours straight, much to that of a cancer patient. Our team raised over $2,000 which was a small team of 8 (6 adults and 2 kids).” 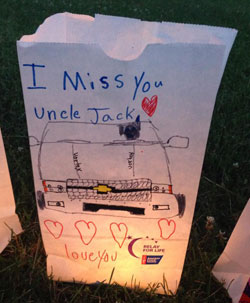 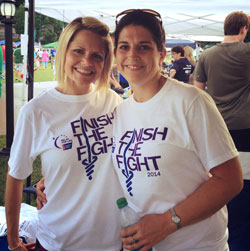