On Saturday, January 26, our White River Junction Office Manager, Harold Elliott volunteered at the 12th Annual Youth Ice Fishing Derby, located at Dewey Pond in Quechee, VT. There were 57 participants ages 14 and under, and 28 fish were caught! Harold served bagels, hot dogs and chili from the Cota & Cota Community Grill. 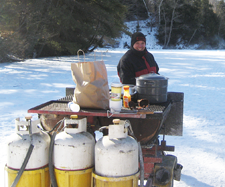 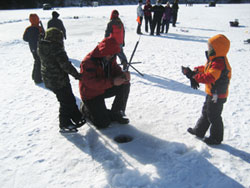 Also on Saturday, January 26 a “Flannel with Flair” event was held in the Roundhouse at Okemo Mountain Resort. Formerly a black tie affair, this year guests were invited to wear their flannel shirts to benefit the auction fundraiser. Proceeds go to the Okemo Community Challenge, which raises money for nonprofit organizations in the Ludlow area. Ludlow Office Manager, Jim Rumrill said, “The event was well attended, and some of the live auction items went for over $10,000!”. Cota & Cota was pleased to make a donation to help support one of our local communities. 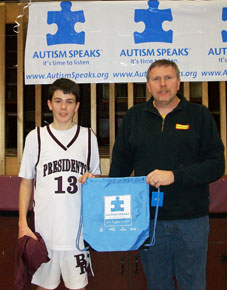 River Booster Club’s first annual basektball benefit for the Autism Speaks organization.  The Black River First Ladies played the Bellows Falls Terriers at 6pm, and the Black River Presidents played the Rutland Golden Horde at 7:30pm. Cota & Cota has sponsored the basketball games in the past, but this was the first year the booster club designated a charitable organization as the beneficiary. The school will now dedicate one game during each sport season to supporting a charitable organization.