More and more Vermonters are sounding off about the proposed $30 million Heat Tax. Editorial writers and commentators describe the idea as a costly burden that is unnecessary. In 1970, the average Vermont home consumed 1531 gallons of heating oil. According to the Energy Information Administration, the average per home consumption in Vermont dropped 45% by 1990, 52% by 2000 and 61% by 2010. A mature and competitive marketplace is no match for a costly taxpayer funded government program when it comes to delivering efficiency services.

So what is the real reason for an 11-cent per gallon tax on heating oil and propane?

There is an influential group of Vermonters that support higher fuel prices by whatever means necessary as a way to make the fuel we sell unaffordable, and thus force people to use less. This political philosophy is written by those that haven’t had the misfortune of living from paycheck to paycheck— or  the responsibility of signing the front of one.

Who else wants higher prices for oilheat and propane?

The renewable fuels lobby and Gaz Métro, the Canadian energy conglomerate which owns Vermont Gas Systems and Green Mountain Power. The utility is aggressively going after a larger market share by trying to convert Vermont homes to natural gas and electric heat pumps. Increasing the cost of fuel oil and propane gives them a competitive advantage.

The Heat Tax is a regressive tax. It hurts the poor who will be paying to install solar panels on the homes of the rich.

The bigger impact may be on Vermont businesses who will have to pay an even greater burden to pay for this new government program.  Vermont businesses already pay a Sales Tax, Gross Receipts Tax, and Petroleum Cleanup Fee on every gallon of heating fuel. Once you add a Heat Tax of up to 11-cents a gallon, you have to ask . . . why would a business choose to expand, locate, OR STAY in Vermont if forced to pay these energy taxes in perpetuity? Simply put, the Heat Tax is a job killer.

The more than 400,000 Vermonters that depend on deliverable liquid fuels will soon learn more about the Heat Tax.

You can help. Here is how:

Call, send an email or letter that lets them know you are opposed to a Heat Tax. Find the email, address or phone number of your elected representative.

Listen to the radio commentary against the Heat Tax by the John McClaughry.

Read about the Vermont Heat Tax in the Montpelier Times-Argus.

Thank you for supporting our work in the Vermont Statehouse. 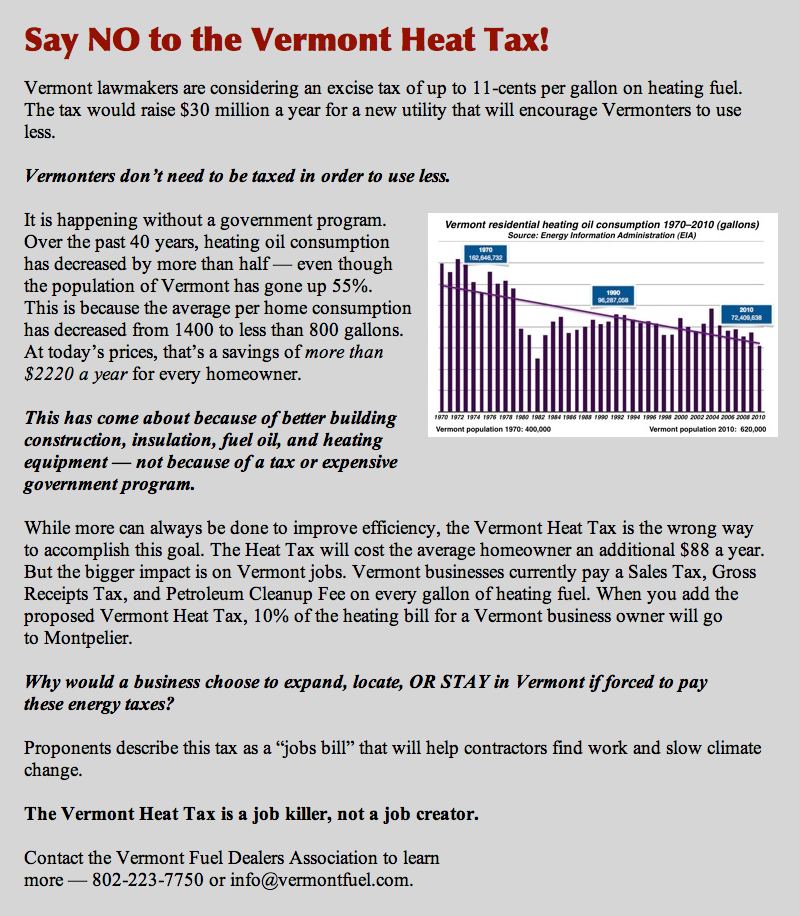